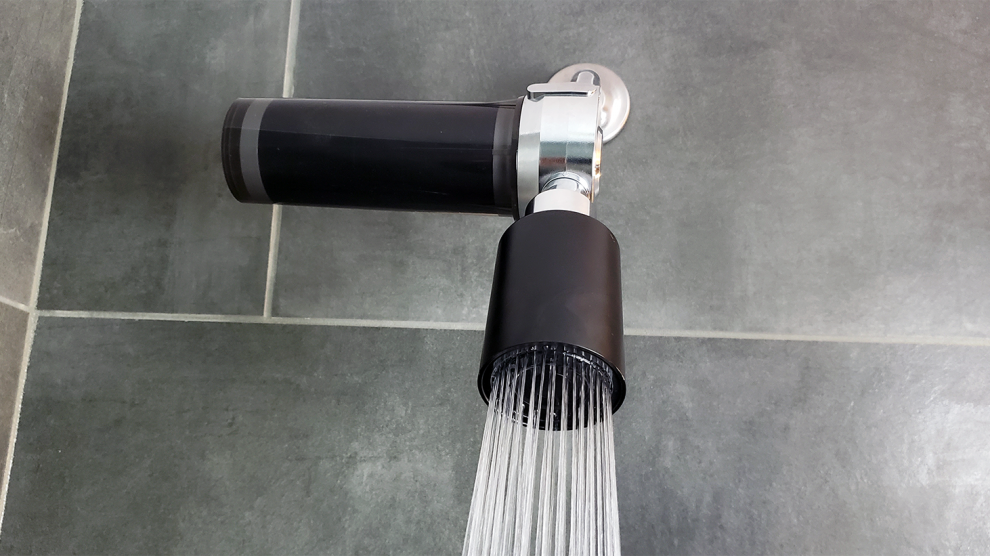 Years ago, when I saw shower filters for sale in the store, I thought they were only for overly health conscious people, people with skin conditions, or people with fragile skin and hair. However, once I read through the scientific studies on it, that’s when my mind changed. Studies found that filtering your shower’s water is likely more beneficial for your health than if you were to shower with unfiltered tap water

While you’re taking that hot, steamy shower, you’re actually getting sprayed with chemical ridden water. This can cause all types of issues, ranging from dry skin, dry hair, to more serious health problems. Science has even linked chlorine and other contaminants to an increased risk of certain types of cancer.

At the end of the day, chlorine is a pesticide. It’s designed to kill harmful pathogens and bacteria, which it does well. The problem is that it also kills beneficial bacteria that live on our skin and in our bodies that are essential to our good health.

Here’s an overview of the risks, demonstrated by medical science, the benefits of shower water filters and if they are really necessary for every household.

1. You will look younger and save money

There are some pretty convincing cosmetic reasons for getting a shower filter. The problem with having even trace amounts of chlorine in your shower water is that it strips the natural oils from your skin and hair, leading to dryness. Also, we’ve mentioned that chlorine is great at killing bacteria, but you don’t want your helpful bacteria that resides on your body killed, that can disrupt the microbial balance.

This can result in dry, irritated skin. It can also contribute to premature signs of aging, such as discoloration and wrinkles. A shower filter neutralizes the chemicals, leaving your skin with a natural softness and luster that is noticeable the very first time you use it. Do you suffer from red, itchy skin after showering? A filter may help you out.

The same goes for your hair. Chlorine strips the natural oils that moisturize hair follicles and leaves you with dry, frizzy hair and a scaly, irritated scalp. Shower filters can restore your hair’s natural shine and texture, taming frizz and increasing elasticity. You wouldn’t be the first who got their youthful, soft glossy hair back. Plus, you’ll save money because you will no longer need to buy expensive conditioners, hot oil treatments, or trips to the hair salon. A friend of mine was able to stop treating her head with lotion because of scalp flakes after installing a filter.

Chlorinated water speeds the aging process. Some studies show similar effects as to those from extensive sun exposure. EPA formulates it like this: “chlorine byproducts trigger the production of free radicals in the body, causing cell damage, and are highly carcinogenic”.

2. More chlorine enters your body via inhalation while showering than through drinking tap water

The chemical chlorine, used by water treatment facilities, reduces pathogenic bacteria in our water yet it’s byproducts are hazardous to our health. When chlorine reacts with organic matter in water it forms disinfectant byproducts, aka trihalomethanes (THMs) one of which is the cancer-causing chloroform.

It is often claimed that, when showering your pores open which leads to increased dermal absorption of toxic substances such as chlorine and its byproducts. By taking a shower without a water filter, you are even more susceptible to chlorine than by merely drinking unfiltered water.

Watch this demonstration showing how quickly your skin can absorb chlorine.

Science News reported that researchers found increases in chloroform in study participants’ lungs of about 2.7ppb after a 10-minute shower. Combined with warm water opening pores, skin absorption and lung inhalation during a 10-minute shower showed to be greater than the amount that would be ingested by drinking 8 glasses of the same water.

Also, besides chlorine and chloroform there are other airborne chemicals that may be absorbed by open pores while showering. Generally, skin absorption and inhalation causes the chemicals to travel directly to the blood stream, contaminating your body quickly and causing damage.

A 1992 report by the American Journal of Public Health links a 15% to 35% increase in certain types of cancer among people who consume chlorinated water. This report also points out that much of these health risks were due to showering in chlorinated water.

What’s more is that the shower is the single biggest source of releasing water contaminants to the air of the home. When you shower, the chemicals present in the water vaporize at a much faster rate than the water itself. This creates VOC gases that contain much higher concentrations of the chemicals than the actual water. Such concentrations are thought to be 10 to 30 times higher.

A recent EPA report notes, “Virtually every home in America has a detectable level of chloroform gas in the air due to chlorine and showering.”

Even though study conclusions are sometimes inconclusive, the signs are clear. Chlorine and its byproducts are a cold hard fact and while showering you are exposed in two ways, dermal and via inhalation. So aside from the more aesthetic changes in your skin and hair, a quality shower filter helps protect your body on the inside.

Do you sometimes feel worse after a long, hot shower than when you first got in? It might be due to chlorine absorption and inhalation. Chlorine exposure can cause physical fatigue, mental depression, and a lowered immune function, making it harder for your body to ward off infectious diseases and allergic reactions. A shower filter will get rid of those harsh vapors, strengthening your immune system and leaving your mind truly invigorated.

“Recently, showers have been suspected to be an important source of indoor exposure to volatile organic compounds (VOC’s)” Source: PubMed.

Vaporized, inhaled chlorine damages lungs. The Center for Disease Control confirms that people who take hot showers are more exposed to chlorine and its hazardous by-products than those who drink unfiltered tap water. This is because when the unfiltered water is heated, the chlorine turns into a gas and is absorbed into the skin or inhaled.

Various publications such as the books Never Fear Cancer Again: How to Prevent and Reverse Cancer and The American Health Hoax: The Surprising Truth About How Modern Medicine Keeps You Sick mention that; “Exposure to vaporized chlorine is 100 times more damaging than drinking chlorinated water”

Scientists have been conducting various tests and studies in the past 20 years regarding the effects of prolonged exposure to chlorine. A representative of the U.S. Council of Environmental Quality stated that “cancer risk among people drinking chlorinated water is 93% higher than among those whose water does not contain chlorine.”

Two separate studies, one in Massachusetts and one in Colorado, both determined that chlorine, as well as the by-product chloramine (which is chlorine mixed with ammonia) was present in water and was linked to an increase of deaths due to cancer in the bladder, kidneys, and rectum.

5. Chlorinated showers may be risky for pregnant women

For women who are pregnant, a shower filter is vital in reducing chlorine exposure that may not only put the mother’s health at risk, but the unborn child as well.

A study conducted by a team in England determined that women who drank or took showers in unfiltered water laced with chlorine and chloramine contamination resulted in various complications with the pregnancy, including spontaneous abortions, stillbirth, low birth weight, premature delivery, and a spectrum of birth defects ranging from nerve damage to weak hearts.

Real conclusions can not be drawn from the limited studies, especially not since no studies specifically on the effects of showering in relation to pregnancy have been done. Considering the other health hazards it may be wise to be better safe than sorry though.

For children, a hot bath or shower with unfiltered municipal water could have dangerous effects on their development. In Belgium, a study was done to find out if there was any correlation between school children who spent time breathing the air in an indoor swimming pool and an increase in lung permeation and the development of asthma.

Children who played frequently at the pool had an increased risk of developing juvenile asthma, and in some cases the symptoms were severe.

They also had more damaged epithelial tissue, which is the tissue that makes up the outer layer of skin and lines the insides of the lungs. This study confirms just how harmful chlorine vapors can be for a child’s respiratory system, not just in community pools, but at home in showers and baths, too.

7. Chlorinated shower damps are known to cause asthma and allergy attacks

Asthma and allergy sufferers are reported to have fewer attacks when using shower head water filters blocking the irritants. Even though outdoor air quality has improved the past decades asthma among children has increased by over 300%. Researchers think poor indoor air quality due to synthetic chemicals, especially from vaporized shower water, may be a cause.

Also remarkably, the incidence of sinus infections has significantly increased since the Spring of 1990. This is theorized to be likely caused by increased (indoor) air pollution and antibiotics use. Chlorine is known to cause inflammation of the sinus linings.

8. We’re already exposed to so many toxic chemicals

In our modern day industrialized society we use more than 75,000 toxic chemicals. Our public water supplies are known to contain 2100 of these. Most, if not all, of these toxins can be inhaled and absorbed while showering.

Considering that other common chemical pollutants, from fragranced products such as laundry detergent to scented candles, from modern building materials to certain foods, reducing our exposure to toxins is critically important to our health and wellbeing. A shower filter can be a great and effective start in doing so.

Are shower filters really necessary for everyone?

It depends on whether or not your municipal water is chlorinated.  In the United States, that includes just about everyone, except if you are on well water, but even then, it’s probably a good idea. Well water tends to be fairly contaminated as well.

There are thousands of different brands and types of shower filters on the market today, but most are made in China, use low grade filtration media, and aren’t certified to even be effective by the NSF.

The AquaYouth 2.0 shower filter is one of the only shower filters on the market that is not made in China and is certified by the NSF.

To learn more about the AquaYouth 2.0 shower filter, click here.

Get 15% Off Your First Order

Use coupon code “CleanWater15” on your first order to get 15% off. 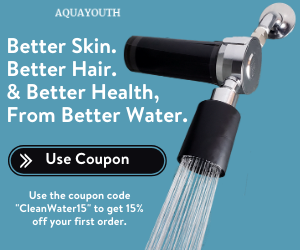 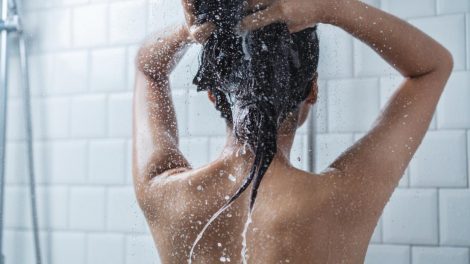 Why You Should Use A Shower Filter 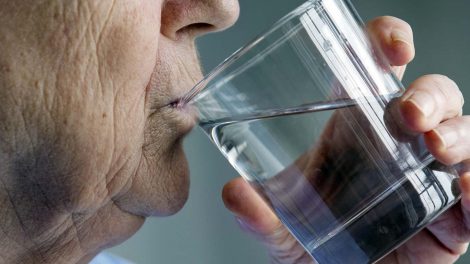 The Top 25 U.S. Cities with the Worst Tap Water 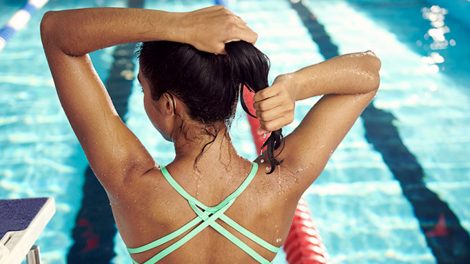 What Chlorine Does to Your Hair and Skin